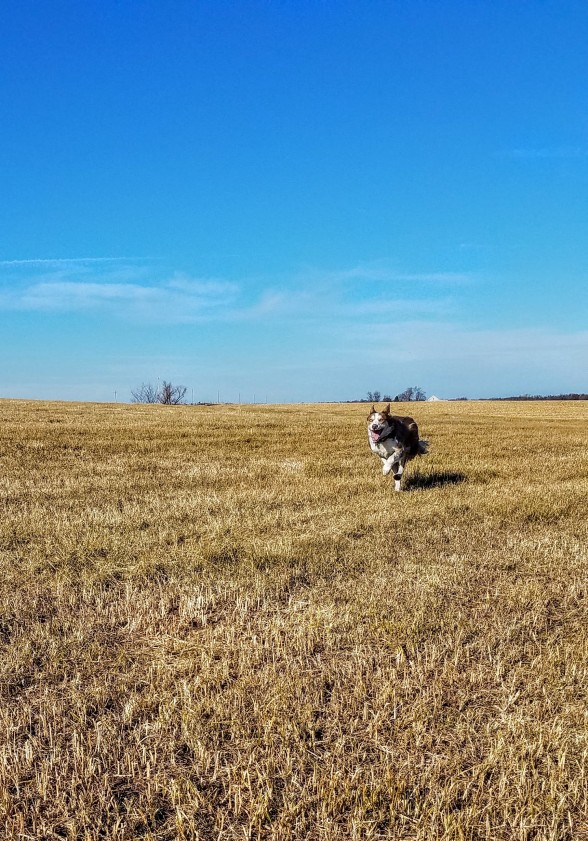 I was out walking with my border collie on this beautiful December day. We walked a hilly country road that at one point borders a hay pasture. Its aged wire fence has one wide opening through which we passed to enter.

With the road to my back, I let my dog off leash to run. She is trained for trails and to be off-leash, so I was very certain she wouldn’t run back through the fence opening and be at risk of being hit by a passing car.

Why could I feel so confident that she would mind me, and stay within the fenceline?

Because we progressed to this degree of obedience over the two and a half years of her life.

As a puppy, she was crazy fast — almost greyhound fast — and she ran with reckless abandon. She was not mindful of my voice, or obedient if she did hear me. She had one thing on her mind: to run like the wind.  I could only let her run inside of fenced areas, far from roads or danger. I couldn’t be sure she wouldn’t run after a bird or squirrel, and fail to check her surroundings. She could easily be hit by a car.

Over time, she matured. She learned to stay attentive to my voice. She learned my consistent commands, such as “this way”, when I take forks along trails or alter course in open areas. When she hears “this way” now, she turns on a dime, comes back to me, and goes ahead of me in my new direction.

She still occasionally gets in trouble for ignoring me — there are consequences; usually having to go back on the restrictive leash, or, if we are at home, into the kennel for “time out”. She knows that obedience equals more freedom.

I need her to be obedient. There are times her life depends on it.

I’ve learned about her, too. Border collies were bred to work with livestock. She doesn’t want to run off; she wants to stay in the area I’m “shepherding”. Sometimes she treats me like I’m the sheep. She runs varied-diameter circles around me, then comes close, nose to my feet, attempting to maneuver me somewhere. I never taught her that behavior. In fact, I am working hard to train that instinctive behavior out of her; she trips me sometimes, and it interferes with our walks.

When we’re out on trails with our hiking friends, which include her two best dog buddies, I often bring up the rear, and she frequently drops back to check on me. If I were a straggling sheep, she would never let me be left behind.

In open terrain, she puts a large radius between us — up to a quarter of a mile when there is open space — and therefore a large perimeter in which she circles. But she always comes back to me.

She is what she was bred to be, as well as what she has been trained to be.

So you see all the reasons why I feel comfortable letting her off leash in spaces that are a safe distance from roads or other dangers. I know her, and she knows me.

Now, here is where God comes into this:

Put God in the role of a master. He wants the best for us. He wants to keep us safe and alive. He takes into consideration our nature, our hearts’ desires, and the level of our maturity, both independent from and in relationship with him.

The more he experiences us choosing to stay close to him, the more leeway he can allow us. We can be “off leash”, so to speak, because we are in constant check with him. The more we keep an ear to his voice, the less at risk of peril we are. When we hear him call, or direct, or command, we respond.

We obey because he keeps us safe if we do. We have learned that.

But what about those people who don’t obey? They may be a “pup in progress”, so to speak. They’re not mature yet. They’re not even aware they could hear his voice, they are so focussed elsewhere.

What about those people who know him, and know better, but they want to retain their own will and independence? They want to stay in charge. In many areas, or in only one, it doesn’t matter; if there is an area not yielded totally to him, they are at risk.

Those people prefer compromise. If God calls out to them, “Stop! The road! A car is coming! You’re going to be flattened if you keep going!”, a stubborn resistance rises to negotiate.

But will it be too late? Will they have been hit by the car that God was trying to save them from?

Would God allow that to happen? Can’t he divert, delay, or halt the car, to save them?

God does not often command those who are already choosing to stay in proximity and earshot of his voice. He doesn’t need to. They are voluntarily in a safe place, simply by choosing to be always close to him; to follow and not lead; to hear and obey.

But those who are habitual, stubborn compromisers … what becomes of them?

God is not a puppet master. He does not force us against our wills. If our wills are set on compromise, at best, or disobedience, at worse, God will ultimately let us have our way.

Simply stated:  The “pups” who obey are saved from being hit by cars. Those who compromise are not.

Be mindful of God. He loves you and wants to keep you safe. He wants to spare you from disaster. Stay close. Learn his voice and voluntarily keep within earshot of him your entire life. 24/7. Always.

When he commands, do it. It’s called obedience, and it will save you.

Jeremiah 29:11 For I know the plans I have for you,” declares the LORD, “plans to prosper you and not to harm you, plans to give you hope and a future.

1 John 5:3 In fact, this is love for God: to keep his commands. And his commands are not burdensome,