After all, the equation should be sensible, mathematical, and logical. If I haven’t earned it, I shouldn’t get it. Beyond that, if I got myself into trouble, I should pay something to get out of it. Or I should have to work for years for it. Or suffer a lot—it seems right to suffer a whole lot. I should do time in my metaphorical prison cell. That’s only fair, right? That’s sensible, mathematical, and logical. It equates.

Innocent people suffer—that’s life. I accept affliction even when I’m innocent, because I see others do so with grace. Certainly guilty people should suffer. When I’ve caused my circumstances, I embrace the consequences of my stupidity. If I were offered release from my punishment, no questions asked, no demands given, I couldn’t accept it.

But what if the jailer said to me, “You’re right. You can’t be released without penalty. That is the law”.

“A price must be paid for your offense. The law calls for consequences. That’s just the way it is.”

I’d understand that. “Got it. What is my penalty? Tell me, and maybe I can do it. If not, I understand. I should stay here imprisoned, because that’s what I got myself into.”

“A ransom can be paid. The King has paid yours for you.”

“I found it in the records. There was a heavy penalty for your offense, and he paid it. He didn’t go to his bank vault to buy off your release. That would have been easy, because he’s very rich. Instead, he suffered for it. I read it in the records. It was not at all fair that he suffered. He did nothing wrong.

“But the records explained that he didn’t suffer in vain. It wasn’t just senseless torture. It wasn’t for naught. When he suffered, it was to pay off the hefty penalty for your release today.”

“Absolutely not. I won’t accept the release. It’s not right. He’s good and I’m not. It’s only right to stay in jail and do the time I deserve.”

“You’d make his suffering senseless? I beg you not to do that. I couldn’t bear it. If you decline, you make his brutal punishment for nothing. He’ll mourn the senseless waste of your life. What point is self-imposed punishment and living out your remaining days in a jail cell? He wants to see you LIVE. If you accept your freedom he gets to celebrate. He’ll be elated! He wants to see you fulfill the potential he sees in you. He’s already anticipating you living freely and fully, in health, abundance, and joy. Don’t reject his offer. Don’t do that to him. Not to the one who is so good, so noble, so gracious, so generous, so sacrificial. For HIM, take the offer of this free release from jail.”

“I knew this about the King. He does this for others, but it’s different when it’s about me. To contemplate walking from these walls, expecting good from the world, a free person without any fines, living and enjoying life…it made no sense to me. But you’ve made me see… to not accept his ransom would be to make his sacrifice pointless. I won’t do that to him. I”ll take this opportunity of free release from captivity. For him. 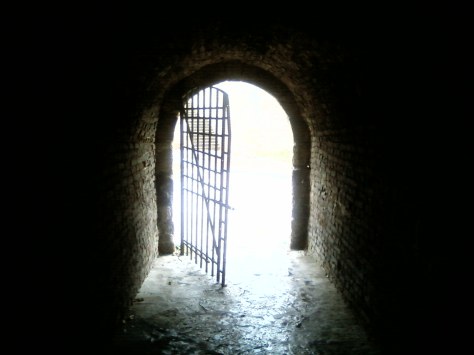 “I’ll just walk out, knowing I don’t have to pay. Or suffer. Or do anything at all. Just walk out, and take the second chance and new opportunity. I won’t let his sacrifice be futile. I want to make his suffering profitable for him…I want to be a good investment.”